5 Marketing Campaigns we Loved in 2018

Let’s admit it, 2018 was a whirlwind. From Prince Harry getting married to the Laurel and Yanny debate (we’re at three Yannys and one who plugged her ears and refused to listen) the Winter Olympics, and the false missile alarm in Hawaii, it was hard to keep up!

Five marketing campaigns that made us laugh, cry, and most importantly, TALK.

The Nike® – ‘Colin Kaepernick – Just Do It’ ad may have easily been the most controversial ad of the year.  When I first saw the ad on social media, I was surprised. It featured a photo of Colin Kaepernick’s face with the statement, “Believe in something. Even if it means sacrificing everything.” Nike made a huge decision to have Kaepernick, the first football player to kneel during the national anthem, star in one of its ads. After all, taking a knee during the Star-Spangled Banner—and the reason behind it: supporting the #BlackLivesMatter movement protesting police brutality against the black community—has been a heated debate that’s divided the country since 2013. Didn’t Nike fear losing a huge segment of its consumers?

Turns out, Nike conducted research and found that its target audience, 18 to 34-year-olds, believed that companies should take a political stance and they supported players who kneeled during the national anthem.

The results of the ad? A LOT of social chatter, chaos, media attention, oh, and a healthy boost in sales.

The ad resulted in a surge of Facebook and Twitter shares, and a whopping 170,000 new Instagram followers around the debut. The ad also led to a host of videos featuring people burning their Nike apparel, or pledging to never buy another Nike product. Amidst all the chaos, Nike emerged a winner because the people who were upset weren’t the majority of their target audience. Rather, the marketing campaign resulted in a 31% increase in online sales.

This Nike ad is a great example of how conducting research and narrowing in on your target audience can land you one of the best marketing campaigns of the year—and get people talking for months. 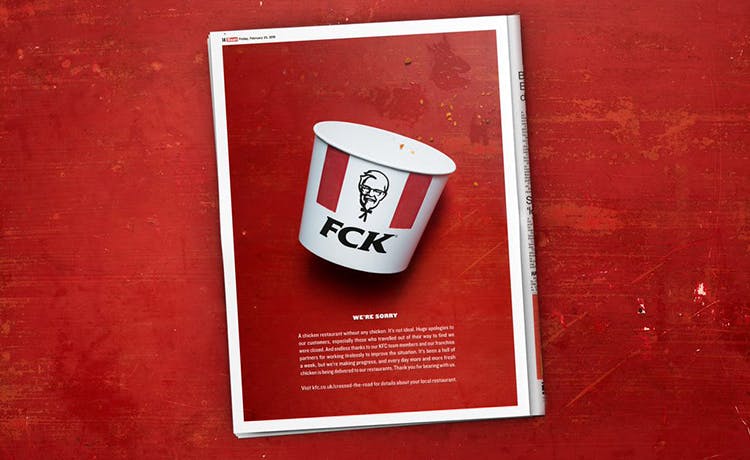 Image source: Marketing Week’s ‘FCK with your logo if you want to make an impact’

Did you say a chicken shortage? Last February, KFC® had to shut down many of their restaurants in the UK because they ran out of their key product: chicken. How that happened is a different story, but the chicken shortage frustrated many of their consumers (I’d be upset if I couldn’t get my chicken fix, too).

While a chicken shortage is no laughing matter, it’s also not a world crisis. KFC had to quickly find the appropriate response to the situation. In lieu of a serious apology for running out of chicken, KFC opted for a wittier response. KFC rearranged the letters in their logo to say “FCK” in a print advertisement as a way to say sorry for closing many of its restaurants’ doors. Since the f-word is not considered as offensive in the UK as it is in America, it was just the right response to the chicken shortage. The witty advertisement not only helped KFC, but its index score jumped from -10.6 to -0.7 (higher than what it was before the chicken crisis). We can all learn a lesson from KFC: know your audience to appropriately respond to a crisis.

One day I was scrolling through my Twitter newsfeed when I came across an article: IHOP® was changing its name to IHOb. Intrigued, I clicked on the article to learn what the “B” in IHOb meant. After all, isn’t IHOP known for pancakes? Why would they want to change it? I learned that IHOP was changing its name to “International House of Burgers” to promote itself as more than just a breakfast restaurant (a name change ruse they kept up for a few days).

Want an effective advertising campaign? Get creative and take risks, just like IHOP. The company used social media marketing to announce its name change to IHOb, a small notion for a company seemingly changing everything it stood for by denouncing pancakes and jumping on the burger bandwagon. IHOP got EVERYONE on social media talking about them after they saw the temporary name change and watched IHOP’s burger promo video. I’d say they achieved their goal of increasing awareness that they sell more than just delicious pancakes. Great job on the publicity stunt IHOP (or should we say IHOb?)!

If you didn’t tune in to last year’s Big Game, you missed out on one of the most unique and entertaining Tide® commercials. You start out thinking it’s just another Old Spice commercial, but then near the end they announce, “It’s a Tide Ad.”  From one funny scene to the next of popular commercial reenactments, it was hard to stop watching! It also featured David Harbour, the famous Jim Hopper on the Netflix Original series, Stranger Things. Now who could resist that?

Almost everyone knows Tide, the famous laundry detergent, so why spend the big bucks to play an advertisement during the Big Game? That’s easy. The main goal of Tide’s “It’s a Tide Ad” marketing campaign was to increase brand likability through familiarity (this is why they used David Harbour) and humor. Tide was in a negative spotlight for a while after kids got sick from eating Tide pods (not something they would ever promote, BTW), so this was a smart marketing move on its part. The company’s creative video marketing had people laughing and talking positively about the brand, making it worth the expense of that prime-time slot.

“Dilly dilly” could have easily been the catchphrase of the year, which is why we’ve also chosen Bud Light®’s “Dilly Dilly” advertising campaign as one of our favorite marketing campaigns of 2018. While the true meaning of the phrase is unknown (some speculate it means “Cheers”), not laughing at Bud Light’s “Dilly Dilly” advertisements during the Big Game (or any of its previous Dilly Dilly ads) was a nearly impossible task.

If you ever need help brainstorming a rallying cry that will increase consumer engagement and sales for your business, consider asking Bud Light! Just like the Budweiser®  Frogs or the Budweiser “Wassup” commercials, Bud Light’s Dilly Dilly ads do an excellent job of getting people to repeat their favorite commercials willingly! Now when consumers take a trip to the grocery store, they can’t help but whisper “dilly dilly” as they walk past the Bud Light cases. If you want to test out your rallying cry to see if it’s as successful as Bud Light’s Dilly Dilly, see if it makes the list of banned exclamations during the next golf tournament at the Augusta National Golf Club.

Good marketing campaigns have these things in common: they tell a story (even if it is just a spoof, like IHOb), connect with the audience on an emotional level (like Nike’s controversial ad featuring Colin Kaepernick) and deliver on a key insight (like IHOP’s ad that addressed what we can only guess was a pain point with consumers: I want more options than just pancakes when dining out). When brands can achieve all three, they might just be lucky enough to make ‘best-of’ lists like this one for years to come.

Ciara is a senior at the University of Wisconsin Oshkosh majoring in Interactive Web Management. Her major covers a wide array of subjects, including journalism, marketing, information systems and computer science. Through her class and internship experiences, she has developed her graphic design skills by creating content in Adobe Photoshop for online and print use. She is also familiar with researching and implementing social media best practices, has an understanding of HTML and CSS, and enjoys writing blog posts on various topics. As an animal lover, Ciara loves volunteering as the marketing coordinator for the Winnebago Pet Expo, a nonprofit dedicated to building dog parks in Winnebago County.

Give us a Call

It’s no secret—we love dessert, but that’s not the kind of cookie we’re talking about here...

If you'd like to decline, we won't track your information when you visit our site. But, to comply with your preferences, we'll have to use just one tiny cookie so that you're not asked to make this choice again.

You can adjust all of your cookie settings by navigating the tabs on the left hand side.

Strictly Necessary Cookie should be enabled at all times so that we can save your preferences for cookie settings.

If you disable this cookie, we will not be able to save your preferences. This means that every time you visit this website you will need to enable or disable cookies again.